The Snell & Wilcox CRV600 comes from about 2011 or 2012 and contrary to the the earlier rack mount versions of their "Converters and Sychronizers" is a monolithic circuit board with Analog ADV chips.

The earlier full width rackmount versions used circuit cards and bays to host about six or eight circuit cards to create a bespoken device tailored for a purpose.

The CRV600 is a "converter" from Composite or S-Video Analog to SDI Digital, and an Aspect Ratio Standards Converter.. which makes it very interesting in that it can convert from PAL to NTSC and vice versa as well as deal with Aspect Conversion between various screen widths and pixel sizes.

The SDI BNC connections are redundant with a loop between dual outputs for the SDI signal.

That it has Outputs for S-Video and Composite leads me to believe it can be used for pass-through to clean up and convert between various standards and then return that to analog outputs, but there is no SDI input. So conversions between SDI to Analog is not possible.

The CRV600 has one USB type B port for connecting to a PC.

This is optionally used for configuring the box, however most settings can be made from the front panel with a constellation of buttons and jog wheel and a backlit LCD screen.

The PC software for accepting a connection from the CRV600 over USB is free for download, but is no longer hosted by the companies which later merged or purchased the Snell & Wilcox line of products. Snell & Wilcox was a UK company that went through a consolidation phase and then merger/sale to Grass Valley in California USA.

The PC software consisted of a device driver for Windows XP (32 bit ) which does not work with Windows 7 64 bit. This comes from the RollTop USB hosting software which then offers up access to the device via a TCP/IP connection over a LAN  TCP/IP port.

Then a program called RollCall was installed on a central PC to manage multiple LAN connected devices via Ethernet. This eventually enabled a studio environment to be managed by a central console and dialog boxes for each remotely connected device to be configured.

Its a lot simpler to use the RollCall software, but not strictly necessary.

Since the device comes from the UK it came default configured for PAL signal types and required some exploration to figure out how from the front panel to set not only the Input and Output connection jacks would be configured.. but also what signal type to search for on the S-Video jack.

Initially I had a problem where the diplay would flash "PALM" ( that is PAL-M )  then "Error" and refuse to lock on to and convert from Analog to Digital. The setting was buried in the "Others" button menu and once it was changed to NTSC (not PALM or NTSC-j) it started working without error.. perfectly.

The CRV600 has an auxiliary corner of the box for optional plug in models to customize it further. One such is the "AD" or AuDio (AD) module which uses WECO 930 three pin strain relief audio jacks to bring in Balanced or Unbalanced Audio and Audio Embed the information in the same SDI signal.

Like the Analog video outputs, the audio section also has analog outputs.

The chips on the mainboard of the CRV600 are ADV7311 and the ADV7198 and several much larger FPGA or glue logic chips.

The ADV7311 is a Digital to Analog converter, no doubt for the Analog Output connectors.

The ADV7198 is a 12 bit capture, 10 bit internal workflow to standard 8 bit SDTV Video Decoder with the Analog Devices ADLLT line length FIFO process to ensure line length sampling compliance at 720 samples per line, and a sophisticated sync recovery system for dealing with VCR head switching noise. This is advertised as their "mini-tbc" feature. 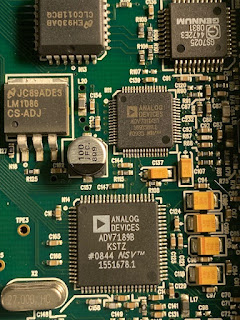 As a Synchronizer, it can also accept a Reference signal for clocking the output from its full frame memory buffers, eliminating vertical jitter.

The CRV600 also has the usual PROC-AMP controls for Brightness, Contrast, Hue and Sharpness.