Real progress. I compiled a custom win32 app which mimics the 'Zeo Android' service and received a connection from the device over bluetooth direct to the windows 7 pc.

That binary string of unprintable characters in the output is what the actual Zeo headband sent to the windows pc before the simple program declared victory, attempted to print the output to the screen and ended the program.

The bluetooth "comm channel" is now open.. its just a matter of interpreting what the headband is sending, and in theory vice versa.

The same "emulation" can be made to work both-ways.

A pc program can now pretend to be a Zeo Mobile and send status reports to the Zeo App on Android to help determine what constitutes a diagnostic packet.

HMSG = prefix of a "messaging" protocol, something like 'headband msg' ?

The program was written towards windows xp and only using  microsoft bluetooth api's so it should work on just about anything windows.

rats.. I thought it would be harder 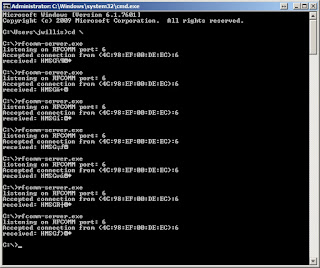