Zeo is a sleep monitoring device which collected Electroencephalographs (EEG) data from a a headband worn while sleeping. It wirelessly downloaded the data when the band was removed and set to charge the next morning. It is no longer being made, however a few final production devices were made available on eBay this month.

This is an exploration regarding one of those final devices. 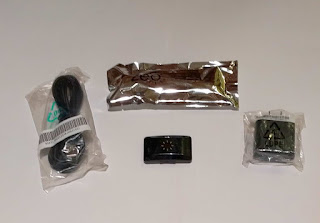 First it comes in two models a set with an Alarm clock, or a set (as show) called a Mobility kit.

I only have the Mobility kit, which is designed to be used with an App for an iPhone or Android device.

The iPhone App has since been removed from the App Store.

The Android App is still available on the Google Play store.

The data collection device is a small arduino like device in the central plastic "brownie" package, which has three button snaps on the bottom to attach it to the headband in the silver package.

The instrument package has a yellow "Spinner" or "Rising Sun" logo on the front, which makes one appear to be Cosplaying the central character from Karate Kid.

The instrument package also has a micro-usb port under a soft rubber pull-out cover on one edge, and a rectangular colored LED and rectangualr button along the opposing edge.

The other two components are obviously the USB to micro-USB cord and a slim 110 volt wall charger with female USB port. The first thing I did was plug the cord into the wall charger, then the wall and then the instrument pack. It immediately began flashing "green".

Bluetooth Pairing was a bit of a "challenge".

The Zeo App for Android did not automatically "pair" with the Zeo. I chose Zeo "Mobile" - 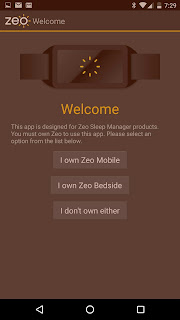 Then "Pair Your Headband" 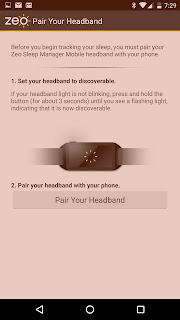 And it searched for the headband, but consistently "failed" to find it 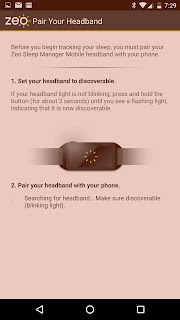 I finally went into the Bluetooth Settings for my Nexus 5X Android "Marshmallow" operating system and found it as an "Available device" labeled "Zeo" so I selected it there and it proceeded to pair. 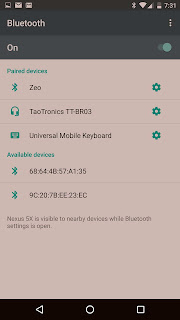 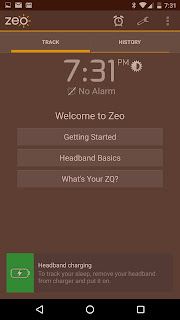