The year in Review

New Years is past, but its still the dead of Winter. So pondering the recent past is a popular thing to do right now.

January 2013 started off with a Bang!

For over 5 years I'd been watching and participating in a "Fringe Group" online in a chatroom. It was an interesting time to be a 'Cord Cutter'. Broadcast TV had finally stopped treating online Streaming like a freakish anomaly and started making episodes of their recently broadcast commercial shows available within 2-3 hours on itunes and other media outlets. 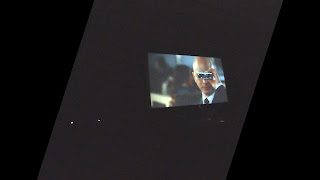 Just enough time if you missed the 'live' event in the chatroom to 'catch-up' and re-watch the show before a post show held later that weekend to discuss the show and listen with live 'Hosts' Darrell and Clint who provided contextual commentary on the recent episodes and discussed how they fit into the overall story arc of the season and the series.

Up until the post Show, you could call or email voice files to be played and edited into a downloadable stream of the post Show.. which people all across the World could then download and play 'catch-up' with the rest of the exclusive Club of viewers participating in this Fringe "Group".

Even more awesome, the actual Stars, Writers and Producers of the show would call in just like viewers and participate in whatever fashion they pleased.. stealing fire from the heavens.. very Prometheus like.

But alas, all good things come to an end.

Darrell and Clint hosted a live Party in "Real Space" at the "The End of the World" in Oklahoma City. Oklahoma.

People from everywhere, across the country, across the World.. even Canada.. showed up in person.. and we got to watch the final Broadcast of the series Finale together. 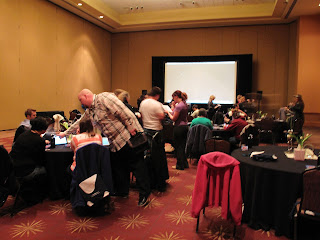 It was not a night to be missed.

And oh yeah, the Breakfast Club has nothing on this group - redoing the hallway scene outside the convention center. 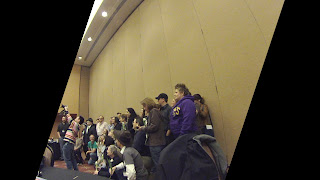