The hits just kept on coming.

Shuttlecraft Galileo, the real one, from Star Trek made final approach and landed at the Johnson Space Center near Houston, Texas

I actually got to drive down there and stay one night across the street at a fine hotel. 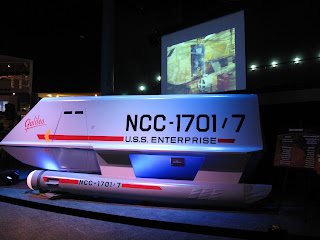 Originally conceived as a "Helicopter" with antigravs and booster rockets. It was the original Star Trek Commuter Van.

They plan to build a replica of the Hangar deck of the Enterprise 1701 in the Space Center Houston to permanently display this visitor from The Last Generation.
Posted by John at 5:30 AM