I moved on from USBSnoopy to USBpcap and Live Wireshark decode. The results were encouraging.

It was a lot simpler to setup, no reboot was required.

basically download and run, then run again to identify the USB Hub to monitor and enter the pcap file name to save the results, the capture begins, CTRL+C to end

to "live" capture, its very similar

as a Host the PC detects when a new device is plugged in, then interrogates it for its capabilites automatically 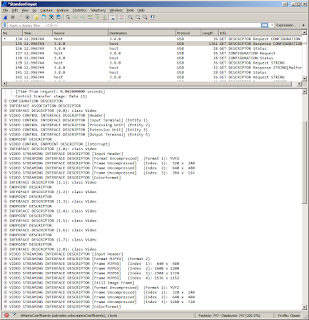 I believe the images are transfered Isochronously since I have made triggers and only seen Isochronous transfers, further when the USB bus was overloaded the Images saved to the PC are interwoven with parts from other images. No Bulk transfers were observed.

This reverses my earlier assumption that flattening was occuring in the device and leads me to think flattening takes place within the image.. but where the laser guideline information is stored I cannot say.

One capture alluded to [ Siri A9 UVC chipset  6333 ] which is every interesting if A9 and Siri happen to have something in common with Apple products. -- curious side note, I got an unusal answer from an inquiry about supporting the Czur scanner in other existing scanner software.. to which the answer was.. not now, working on adding Apple iPhones as capture devices. I thought nothing of it.. but now I wonder if that brief answer might be a result of the chipset already in the Czur scanner.
Posted by John at 1:52 AM