Used VLC and targeted the scanner as a capture device. The results were surprising: 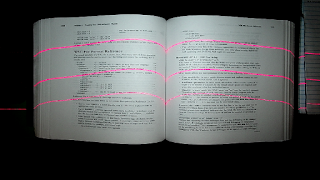 Not sure how I triggered the Laser guides to appear and become part of the image scan, they can obviously be chroma-key removed, and extracted to contruct a mesh for de-warping.

Finding software that can make use of the captured images maybe more of a challenge.

Some like Booksorber also seem to already have "flattening" algorithms that would not make use of the guidelines.

Although, after the images are captured, it would be assumed you could "import" them into the native software provided with the scanner and corrected and ocr'd then bound into an ebook.

Atiz - BookDrive Editor Pro
Although I still find the Quality of the native Czur software for the PC simply amazing.
Zooming in on a single image reveals its in focus, has fine detail and really looks good. 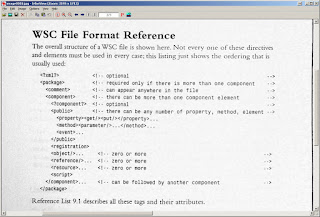 Browsed the native software directory and found libraries for VLC and the BSD Licensed OpenCV project, as well as familar libraries for Abby FineReader.. all best in Class quality components.

The OpenCV for "Open Computer Vision" project is known to have fairly technical library functions for both capture of images and manipulation, including "undistort" and "dewarping" functions.

So that further supports the "idea" that the scanner is a good quality camera and acquistion platform, but "flattening" of the images takes place within the native software provided.

The selected libraries are well chosen for porting the software to other platforms like Linux and Mac OSX since they exist on those operating systems as well.

More than ever I wish they would release a simplified SDK for plugging the device into existing scanning tools on each operating system. I don't think existing tools would compete with the native software, but would quickly expand the range of useful options for people who don't have time to learn the native software, or would rather use the scanner in a way other than it was intended.

The one or two functions that would be most useful would be simply hi-res default image capture that the current native software uses to capture and image and offload that to the PC. The images seem to come in at about 3 MB and in the JPEG format. Also the function that captures the same image with Laser Guidelines would be very useful.