The trick lay in the versions and history.

RollCall Lite was a slightly stripped down of the full suite of network management tools minus things like their Logging server. It was free for download, but since it came from either 1998/1999 or 2003/2004 there aren't a lot of copies left on the internet.

The PDF documentation manuals also suffered from being written probably by people overly familiar with the software and less with communicating information to other people. Many terms are left poorly or completely undefined and its assumed the reader knows the context.. mostly it comes up as gibberish and ends abruptly.

The key was reading a small portion of a subnote that referred to difficulty Upgrading from Version 3.x to Version 4.x

Version 3.x seemed to be written for an older Windows platform, perhaps as old as 98SE or ME

Version 4.x seemed to be written for a newer Windows platform using Java

Version 3.x relied upon a separate service that monitored and managed the USB port and surfaced it in Device Drivers as a virtual COMM port, but also as a TCP/IP service on port 2059 - this separate service was called - RollTop and was a separate install and start up.

Version 4.x was a Java applet and program called RollCall Control Panel, this started up and searched for services on TCP/IP port, including the local workstation, and if told to search port 2059 it would find any device connected over the USB port.

It could then be configured to source the device templates (control panels) from the device and build a control panel within the Java application RollCall Control Panel.

The caveat of this however is that although the RollCall install warns you need Java JRE 1.6 or later, only Java JRE 1.7 actually works - the behavior with 1.6 is a blank window that never populates or builds with controls and through an obscure SWING AWT error message in the error.log file 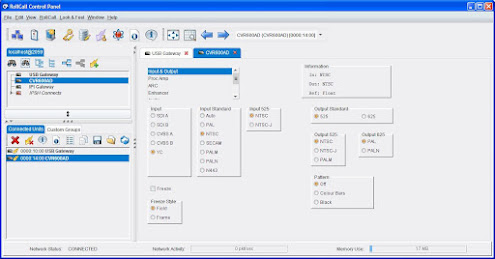