I've been trying to figure out the Spinrite 6 - DynaStat Data Recovery, chart or realtime graph and think this is what it means. 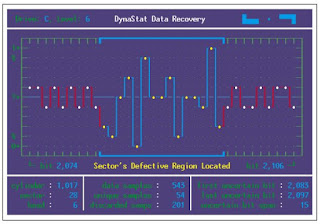 The key thing is that many descriptions display the chart in monochrome or b&w and loose the ASCII "focus window" that pops up in the center of the display when it goes to work. That is "you don't see it" unless you know exactly which 8-bit graphic characters to "look for".

However the Spinrite 5 - Owner's Guide has a color snapshot, and when it runs on your computer Spinrite 5 or Spinrite 6 displays the information in full color.

Mostly its a [Target Site] like on a gun or instrument that draws your attention to just a few bits being read in a sector. Old school most sectors were 512 bits, today they are more likely to be 4096 bits.. its kind of decided by the hard drive manufacturer at the factory.. though some can be switched by hardware jumpers or firmware/software by the end user. The [Target Site] "slides" from Left to Right along the sector bit stream, with a [Very] important Left-hand [scale] which tells you some very important things.

Elsewhere in the Spinrite 5 - Owner's Guide, are drawings and descriptions of "Flux Reversals" and some theory on how they are used to store data in a somewhat loose, variable way which ends up storing digital "1's" and "0's" in an [analog] signal format on the "spinning rust". Basically the hard drive has a "cut off point" or threshold at which it decides an analog signal being read from the drive is a "1" or a "0" and reports a string of bits to an error correction engine.

Some of the bits represent a checksum and the engine can go to work reconstructing the string if it determines a read was "bad" or "no good".. if that fails.. the drive reports that sector can not be read. The drive can also try to "re-read" the sector to try blindly to get a "perfect" read.. but that seems to be up to the judgement of higher up software decision makers in the firmware, bios, and operating system... as far as the ECC engine is concerned its fixed, or its not fixed.

That [ Left-hand ] scale is an [uncertainly] scale. Close to the [Center] there is "little" or "no" uncertainty. The [threshold] reader for a single read decides there is [no doubt] or very little doubt, that a bit is a "1" or "0".

Over many successive reads of the same sector, the bits are [re-read] over and over. If they are always the same value, a "1" or "0" their uncertainty "Stays" very close to the center line, because the doubt is very small. And their "digital wiggle" tracks stay [red] for [certain].

But if over repeated re-reads those same bits sometimes "flip" from "1" to "0" or vice versa, then their [certainty] gets [more] "uncertainty" so they drift away from the center line.. in the direction that they "most" show up as.. that is "mostly a -1-" or "mostly a -0-".. meanwhile as the same sector is read over and over again to [pile up] a real-time data graph of information about the same [Target Sited] bits the levels can "change" moving up and down -- or really "closer" or "further" from the "certain-line"... and that's why the center line is labeled with a [?] its a question of how certain any one bit is and which value its appearing "mostly" as..

If this were a "horizontal tube graph" it might be more intuitive since at the extreme edges of the graph, where Uncertainty is Maxed out for a "appears 1" or "appears 0" they are just as likely to be the opposite.. so it sort of "wraps around" in uncertainty.

Put another  way the y-axis Zero value is 100% certain and either side is [backing down] from 100% certain.. so its sort of like SciFi Tachyons.. you can't go at the speed of light.. but you can back down from either side of it.

Perfect "bits" don't move up or down, their certainty and uncertainty "never" change.. but real-world bits tend to change a little bit. Imperfect or "bad bits" do change (a lot) and seem to move up and down while being re-read.. and Dynastat is measuring that change to "try" and discern a "pattern" or a puzzle piece that works to solve the error correction engine puzzle and "invent" a perfect read result.

When Spinrite does solve the puzzle it "lets" go the sector and lets the drive "re-locate" the bits in that sector to a spare sector of the drive, so the result of the puzzle solving is not lost. (of course by accident, a good read "might" happen out of all the repeated reads.. that also "lets go" and get relocated immediately.. if at the end nothing comes up.. then it makes a guess and manually writes the guess and relocates)

Normally - Dynastat stays "laser focused" on a small number of bits [centered - horizontally] in its "sites" and the bits on either side do not move. But when Dynastat is not being used, it strums through the string of bits displaying them as a red beaded line appearing to ramp up and down. The uncertainty doesn't really matter as long as the error correction engine is still reporting a sector as "good read" and nothing happens.. error engine is happy, spinrite is happy.. only when the gyrating produces a "bad result" according to the checksums does Dynastat swing into action and "focus" on a particular region.

But this is very confusing to the average user.. the hypnotic rhythmic march of the beaded red line (which is a "read" line) can stay close to the center line of "certainty" or veer wildly from it depending on the age and freshness of the Magnetic Flux "fade" but as long as it doesn't trip the error correction warning klaxons all is well.. so its really meaningless unless the error correction bits do not return a "good read" result. When things go bad though, the display changes and the Site Scope pops up in living color and zeros in on the bad bits and starts re-reading that sector and displaying only those "few" bits that have been determined to be "variable" or causing the problem.

As the alien "blue-green" bit snake wiggles back and forth.. Spinrite does battle with the Cyan data dragon wresting your data from oblivion... or that's how I like to picture it.

Maybe Spinrite's official mascot should be a blue-green dragon with a 'Dirk the Daring' knight to save the day?

I've no special knowledge of whether my interpretation is rite or wrong. I don't know GRC or have any other references regarding the program, I use it and have wondered about Dynastat for a long time.

This is my online blog and I'm pretty sure no one reads it.. so if I guess wrong its pretty harmless.

Mostly these are just my personal notes on the matter.

If you had a thousand piece Jigsaw Puzzle and were close to finishing. Then discovered only one piece was missing.. you could give up. Or you could look at the shape of the Puzzle Piece, and all of the surrounding puzzle pieces and the pictures on them and try to "invent" or "make up" your own replacement puzzle piece from all of the evidence available to you. You could cut it out of thin cardboard, draw a picture on it that sort of looks similar and try over and over again.. until you felt it was perfect (or good enough) match.

In the world of data, usually many layers of redundancy exist far above the actual bit layer. In a picture for example, rarely does any one bit matter.. the human eye tends to "gloss over" or fill in the blanks visually from intuition. Databases tends to have redundant file system error correction mechanism based on parity or additional copies of the data in buffers and caches which will automatically be referred to upon discovering a problem at those higher layers. And people are suppose to actually have "backup" copies of their data..

So its kind of like from the Quantum level to the Macro level, that we all live in, we have built a digital world on top of a sea of ever shifting sand.. which by its very nature is "random" and unpredictable.

The Universe at large is also like those "certainty" graphs.

Close up and within our Solar System we are very certain of things, even closer.. on the tip of our nose.. we are "very certain" of things.. but looking at a distant star.. or the edge of the Universe with a telescope? Our Uncertainty grows very large.. and in every direction we come to an infinite uncertainty that we assume "wraps around" us like a bubble in every direction in space.. and the bubble extends even in the direction of time. We are in a nearby bubble of "certainty" in a ocean of "uncertainty" which wraps around us like an all enveloping envelope.

The Big Bang was a point of  "certainty" like the center line in the Dynastat graph.. it was we think the "most certain" point in all of creation..  everything further away from that in time or space has been less and less certain and more "variable".

The Quantum realm itself didn't exist in the moment of the big bang.. there was no room in space, no room in time for it to exist.. there was no quantum uncertainty. But as the universe unwound, or unfolded like a developing flower.. it spun out intricate and seemingly infinite complexity like a fractal.. and more and more quantum levels and states became apparent.. more and more uncertainty developed.

Its almost like the Third Law of Thermodynamics, that everything degenerates or declines is an admission that as the universe evolves it becomes "more complex" because "there are more possibilities" or more uncertainty.

or even simpler.. bring a lot of people together to build a town with a core.. and spreading out from that core will be ever more complex neighborhoods and organized regions with "some level" of influence over all of the others through the shared core.. but they will also have regional differences and complexities.. different quantum realms.

what was the saying?

The future is here, its just not evenly distributed..