Kdenlive, a replacement for FinalCut Pro or Adobe Premiere

Opensource on Windows usually doesn't blend well. But Kdenlive is a suprisingly functional and smooth NLE - Non-Linear Video Editor that just got ported to Windows and MacOS. Free as in Beer it has all the features you would expect in the old FinalCut Pro, Adobe Premiere or Sony Vegas Movie Studio products. Multi-track, themeable and stylable its also easy to adapt the editor look to something more comfortable. kdenlive.org 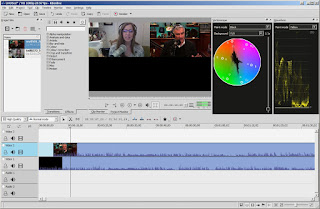 It has a ton of transitions, color correction, and video and audio effects. Its built upon several ultra-portable opensource project foundations which doesn't tie it to one PC platform. Originating on KDE on Linux, it runs just as well on many vintages of Microsoft Windows and Apple MacOSX.

If your in the market for a video clip editing tool of the calibre of FinalCut Pro or Premiere, definitely give it a shot. On Windows its still so new there isn't even an installer. Its just a smallish Zip file to download and extract, and a few ffmpeg files to copy into its core program folder, and a presets folder to copy from the ffmpeg distro into its core program folder and then simply double click the kdenlive.exe - there is a warning box that currently flys up and suggests some missing icons and add-on tools.. but they are totally unnecessary. The default windows MFC control icons are both familar and makes it feel much more "native" to the Windows operating system.. and I presume the same would be on MacOS.

The Linuxscoop YouTube Channel reportedly uses it to edit some of its videos (if so):  then take a look at that channel to see if its what you've been looking for -

I would caution (a) it's "Zippy" as in fast, and (b) its not a "Storyboard" editor like Windows Movie Maker or iMovie.. those are [cut and paste] editors that let you draw a story like a train with box cars.

A Non-Linear Editor, gets its name (NLE) from the ancient artform of literally cutting film into strips called "clips" and then resequencing and splicing them together (either) one after another or even (on top) of each other to "composite" an entirely new visual scene.. this was the way Special-FX were done in Hollywood back before there were "computers" and even how the first Star Wars movie was made.

As an NLE with infinite [tracks] both above and below, Kdenlive.. can composite.

[Note: I got a an out of bandwidth question about setup. It does (Not) have a slick installer yet, its still just a Zip file download. After downloading on Windows, extract it. And download the ffmpeg Zip file which is linked from the same page. Extract ffmpeg, inside that folder are ffmpeg files, copy those over straight into the Kdenlive folder, [and] copy the ffmpeg "Presets" folder over into the Kdenlive folder. Then you can double-click on the > Kdenlive.exe and everything starts up and runs just fine. -- understand Windows isn't their primary focus.. it just happens to run extra sweet on Windows.. enjoy the Candy.] - {You add Tracks from [File] > [New] > mid-page > "Video tracks" or "Audio tracks"}
Posted by John at 8:44 AM