Here is the download link for the TWAIN32 driver with English prompts and labels. 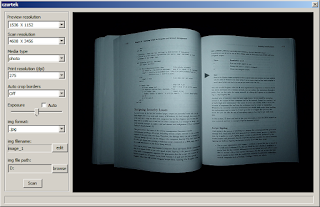 You will want to save it to your hard drive and install it. The driver produces a directory with the driver and manufacturer scan (capture) application as a .ds file.

When you run any program that understands TWAIN32 it will search the c:\windows\twain_32 subdirectory for all "datasources" which are actually the driver application combo and offers them as choices when you Select and Acquire from that application. The Application then starts the manufacturer Capture Application and you can then operate the scanner "essentially" manually.. with all of the features the manufacturer configures into the drivers interface.

Again, I do not have the source code for this TWAIN32 driver, so I cannot fix bugs or improve upon it.

Czur also did not package or accept reponsibility for the Chinese to English translations -- that is, the translations have not been [fact] checked.. they are my "best estimates" as to meaning. So you accept some responsibility for using a TWAIN32 driver that was not officially released by Czur. It is their property, but the english strings.. are my fault.

The 42 minute YouTube video demonstrating how to install and use it is here:


And I must apologize for the quality of the video.. I did not have time to edit it. It was produced very late after work and quickly tossed together. The reason it was not further well thought out before hand is I did  not know Czur would grant me the privilege to produce a video about the driver. I had my doubts they would. Because they allowed me to see and use the driver before it was officially released. I take their trust very seriously.. as I do everyones.

But this driver and the extra abilities it grants end users is very exciting.. and I'd like to encourage its use, and encourage the release of a TWAIN32 driver for MacOS and Linux (or at least SANE). MacOS can use SANE drivers as well.. but in general companies prefer to work against a commerically supported specification.. which is why I favor TWAIN32 (its more likely to get done).

TWAIN64 "is not that important" -- in some instances it "might" please a few people, but really in this instance using the TWAIN32 driver on a 64 operating system is completely acceptable. Better to have TWAIN32 support across the board, Windows, MacOS, Linux.. than TWAIN32  and TWAIN64 only on Windows.