The Zeo has an FTDI usb chip and when it is plugged into a PC it enumerates and installs USB drivers and a COM port. I happen to use FTDI serial cables.. so it found a compatible driver immediately. This seemed to be backed up by a much more thorough and clear photo spread of the internals of a Zeo Mobile. 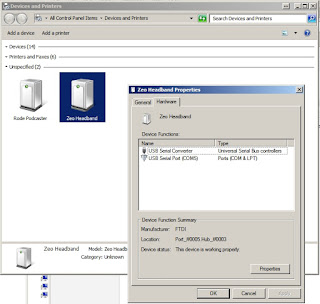 The main MCU processor is also clearly indicated as a Silicon Labs Gecko with 128 MB Flash.

The tech guides for the chip indicate it can be flashed in one of two modes over USB or hardwired UART, and in collaborative boot mode, or destructive [overwrite] bootloader mode. The latter would make more sense, and there are no prompts while it is powering up. With Bluetooth Serial port emulation it might even update over wireless.

Its hard to discern how many generations of the hardware there were.. at a guess three.

One user reported using a Mac OSX kernel extension to perform a firmware upgrade, but it wasn't clear if he used a bedside unit or mobile unit. When asked later he said it was [so long ago] he really couldn't recall details.

Test command modes were reported in some released documentation, but they were simply listed, and not described or explained. It is assumed they were for factory or development purposes.

The goals have not changed however, simply to use it as made, not to modify it.. but getting access to raw sampling data perhaps with one of the test commands would be really nice.


Looking at one aspect, I also get curious about other aspects.

This is a [really] long interview with Ben Rubin and how Zeo got started and built (the science, the concepts, the product, the company) some of the details might really be interesting: (the video may or may not work, but the long transcript is still readable)

The Best site description of how to Mod the Zeo Beside unit in German.. its useful to Zeo Mobile users only in that you then know what [does not apply] to the Zeo Mobile units.

But it is really good.

It is really brief.

And it has good photos and graphics.


This is a Patent that appears coencidentally to have been granted very close to the time Zeo commenced shutting down.

US Patent 20130127708 : Cell-phone based wireless and mobile brain-machine interface

In which (based on all that is publically known about the last Zeo Mobile Pro unit) it appears very similar, the Patent was assigned to The Regents Of The University Of California

The major difference being this patent seems to be more broad than just monitoring 'sleep' but it did use FFT transforms to reduce data into signal patterns that could be interpreted.

It describes a device to be used with a mobile cell phone over Bluetooth, and a remote "sensor and data processing headband" which would transform opamp captured signals with a 12 bit ADC into digital signals.

The pictures of the example device also look somewhat similar.