This was formerly the Microsoft Live Writer which I believe came about as a result of the acquisition of Jeremy Allaires old company or project.

Earlier this month Google was turning off the authentication API that the former Microsoft Live Writer application was using to support logging on and editing Google Blogger Blogs for the owner of the Blog. Coencidentally that appeared to have happened the same day Open Live Writer became available as open source.. leaving users stranged between an old tool that could no longer auth to Google, and a new tool that didn’t yet support the new Oauth2 that Google had switched.

I attempted to install the latest edition of OLW.. it crashed.. but then I rebooted and opened it again. It spawned an instance of my default browser “FireFox” and proceeded to ask me to logon to Google, presented me with my logon and a confirmation box that asked if I wanted to grant OLW access.. I clicked Accept.. the page cleared and said I could close it.

OLW then proceeded to enumerate my different Blogs and asked me which I would like to work with and now it appears to be working.

I don’t know if anything actually got fixed or Google temporarily turned the old auth system back on, or the open source OLW team completed the new code to support the new auth system. But if this posts.. then I guess its working. 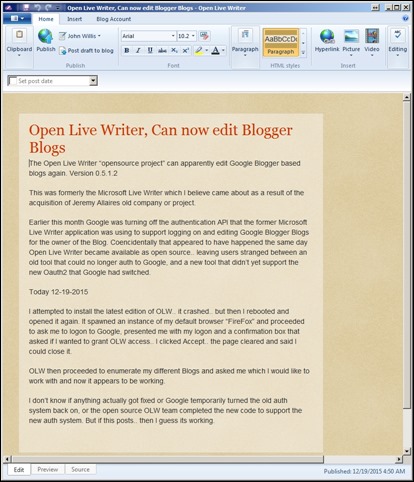