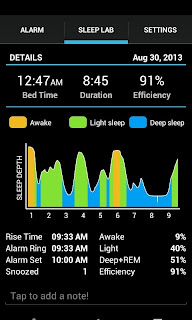 A nice Android Sleep monitor is the app appropriately named "Sleeptime" it produces motion sensor graphs of data collected while your asleep.

We seem obsessed with the idea of getting a good nights sleep. Today its typically recommended as 8 hours. But there has been a lot in the press recently about a "natural" bi-modal sleep rhythm. Divided first into a four hour "Deep" sleep followed by an hour of so of the "Night watch" old French for "Awake" and then "Light" sleep for four more hours.

The "melatonin" spike everyone has heard about usually comes not within "minutes" of falling asleep but as much as 2 hours after dusk, or after retiring.

Let's put all that together, 2 hours to get ready, 4 hours Deep sleep, 1 hour Night watch, 4 hours light sleep is a grand total of 11 hours minimum devoted to the pursuit of a good nights slumber. Yes.. that is close to 12 hours or half a day.

I'd like to think the important sleep gets taken care of first, so its great that Deep sleep comes first, but only after 2 hours? Somewhat disappointing.

To further complicate things, apparently if we're exposed to "Blue light" like the kind a Computer Monitor casting the Blue background from Windows or OSX operating systems usually have, the melatonin spike can be delayed even further.. as much as 2 hours after we shutdown the computer. To counter this I've changed the default background on all my computers to a neutral "brown" and added f.Lux to gradually "tint" the temperature of the screen towards the warmer tones as evening approaches.. based on Latitude and time of day.
Posted by John at 7:11 PM